And just when you thought it was over a new story hits the internet! 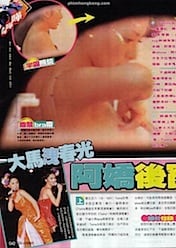 So one of the girls Edison Chen (陈冠希) bedded, Gillian Chung, has been banned from the Beijing Olympics 2008.

Gillian Chung was supposed to perform during the the opening ceremony of the big show. Now she has been kicked out due to the scandal...

That reminds me, when do the pictures of Maggie Q (李美琪) finally show up? Har har har.

In case you have no idea what this post is all about, read my post 'The Edison Chan "Sexgate"'.

Shanghaiist reported some new stuff, too:

Three pictures of 19 year old Vincy Yeung (杨永晴), Edison Chen's current girlfriend, have also been released by the mystery man "Kira", and here's where it gets a lot juicier. Vincy is the daughter of Ricky Yeung (楊超成), brother of tycoon Albert Yeung (楊受成), the boss of Emperor Entertainment Group who is said to have numerous triad affiliations.