Zhouzhuang is supposed to be the most famous, or at least most beautiful water town in China. You may have never heard of it, but there is a chance that you have seen it already: It is used during the showdown of the third 'Mission: Impossible' movie with Tom Cruise. In the movie, the editors 'fake' the town to be in Shanghai, but that is not really true. Zhouzhuang is near Shanghai, but not that near - a bus trip to Zhouzhuang takes about 60 minutes and a ticket including entrance to the city and the various tourist spots costs about 150 kuai. Some agencies charge you up to two-hundred kuai, but if you simply take subway line one to the Shanghai stadium and go to the bus terminal, you may save some cash buying your ticket there yourself. Also, you can take a bus at noon, which makes much more sense then at 7:30 in the morning, like that travel agency wanted to sell us. 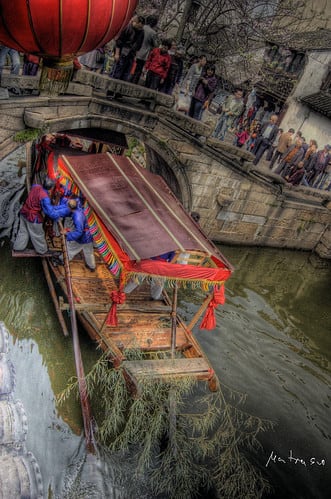 'Zhouzhuang was built in 1086. It is surrounded by water and boats are needed even for short-distance trips, thus the style. Famous for the preservation of numerous buildings of the Ming and Qing dynasties, Zhouzhuang has become an outstanding representative of water-towns in the south of lower reaches of the Yangtze river and the treasure of oriental culture for it's one thousands years of history, rich Wu's culture, it's beautiful scenery as well as unique folkways.' 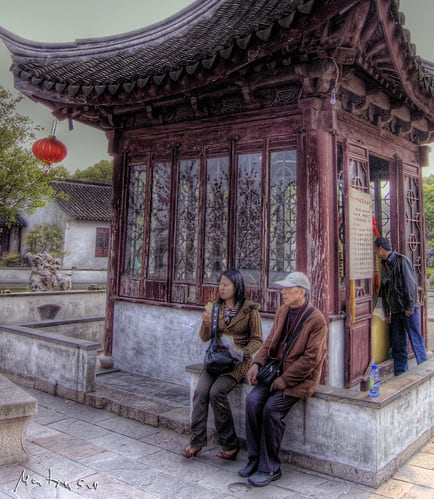 We arrived in Zhouzhuang at 12:30 and drove back to Shanghai at 6:30, and that was already one or two hours too much, as there is only so much to see. Anyway, we went there on April the 8th and had a nice time. Even though it was cloudy, as you can see in the pictures I took, the views of Zhouzhuang are gorgeous. Like almost everything in China, Zhouzhuang has a big catch - at least for foreigners: the vendors there. While you can stroll calmly through the narrow streets as a chinese person and enjoy a bit of window-shopping, as a foreigner your ears get bombed by words like 'Look! Look! Rolex!' or 'Please come, come in please!' or 'Hello sir, have a look!'... Damn, sometimes I wish I were chinese, really.

It brought back the feeling of being at the famous, now-closed fake market that was near Huahai road in Shanghai. But that horrible feeling, not that beautiful one. Anyway, aside from that, the city was also packed with tourists, so that it was almost a pain to cross some bridges or go through some really narrow streets - you know how the chinese push, don't you?

So, given the price of this trip, it was worth it as it is not that expensive and only one hour from Shanghai. For foreigners though, I recommend going to Suzhou, where you can find true peace and tranquility in the wonderful gardens there - shop free areas, guaranteed!
See all the images of Zhouzhuang in this flickr set.