In the picture above you see that I eventually got a press card for the SIFF, the 10th Shanghai International Film Festival. But what a hussle! When I went to the Festival de Cannes two years ago, they asked me for a bunch of stuff that I had to submit there - by mail, printed out! It seemed much easier for the SIFF - from the website at least - until I stood in front of the accreditation table and was asked for a chinese press card. A what? I got a german one, but not a chinese one. Knowing the chinese bureaucracy, I almost gave the festival mentally up, knowing that it would probably take months to get one. But thank god the guys there were cool, and after a small talk with the boss including a small presentation of my previous work that they really didn't seem to care about they allowed me to register anyway. Lucky me! After I got my badge I headed with two guys from New York to the International Conference thing in Pudong, where we attended the SIFF press conference. There I learned that a word doesn't make something international since the whole conference was in chinese and without translators. But a friendly journalist told me every once in a while what they were talking about while I was playing around with my camera: That they invited Julia Roberts but that they don't know if she really comes since she is shooting at the moment and other stuff. Not that interesting. Tomorrow things get hotter when the stars finally show themselves. So let me get my sleep now and check back tomorrow for nude pictures of Sharon Stone walking the red carpet. Here's one more pic to prove that I really was at the press conference: 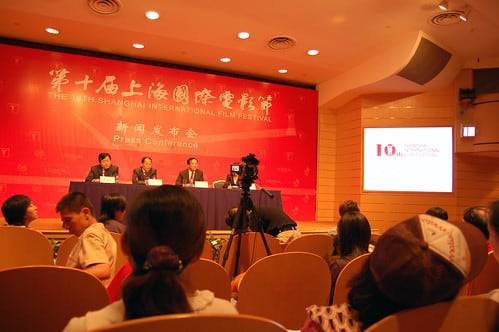