Marriage makes you do things you never thought you'd do. Like watching TV series such as Sex And The City or Desperate Housewives. But, as it is normal in a relationship, you compromise. My wife watches testosterone filled action movies with me every once in a while and I watch female movies that make me want to rip my eyes and ears out in return.

But I'd be lying if I'd say that I didn't enjoy Sex And The City.

10 minutes or so into the first episode of the very first season, I was tempted to stand up and throw myself out of the window. But as we continued with the second and third episode, I slowly started to like it and to got rid of my hate. If you look over the boring fashion stuff in the series - as a man, of course - it's quite an interesting show with more and more deep characters. And you can learn oh so much about women, seriously, it's helpful. 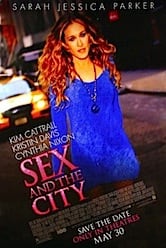 Over the seasons, all the characters are faced with realistic problems and their friendship gets them through it. While it's sometimes too american with all the emotions and stuff, it keeps on getting better and bigger, introducing more and more characters and poking fun at a lot of things. One episode, where Carrie has to fix her Mac even got me laughing real hard... Well done.

So, when the DVD with the movie finally got out in Shanghai two days ago, I immediately bought it and watched it that very same night with my wife, who had been looking forward to see it since I teased her with the first released trailer.

During the opening credits, I already got a bad feeling. They actually tried to introduce the most important characters of the show in two minutes or so, showing some snapshots of the seasons - but not really telling anything at all. You got the names, alright. But try to explain Samantha in 25 seconds. Her character is way too complex to be explained in that short amount of time. Or the hardships that Charlotte or Miranda went through in those six great seasons.

Wouldn't it have been better to just say nothing, so that people who don't know the series at all can build their own idea of them?

And then, this dump of a story started. Carrie wants to marry Mister Big, Mister Big wants to marry Carrie... And on the wedding day, Mr. Big doesn't get out of his car? And Carrie leaves him? Huh? What did just happen?

Right there, after that scene, we should have taken the DVD out and burned it on the spot. But we didn't, we continued to watch the movie and watched how it destroyed all the things the series build up in such a long time. Now it is one thing to have a bad story. But to change characters completely to get some dramatic story line going is just way out of borders. It's not fair towards the fans.

But the very worst of it all is that they actually pulled off to show the ending of the movie, that's the most ridiculous thing I've seen this year so far. I wont spoil it, but damn, Hollywood. It's an insult to anyone with a IQ over 50.

Director and writer Michael Patrick King really managed to mess everything up in 148 minutes. It's a mystery to me why they accepted this screenplay in the first place and why they didn't let Darren Star, the TV series writer, edit it. But I guess all the brands featured in the movie payed really well and none of the actors are getting any younger...

Let's just hope they don't make a second movie, as the rumors tell...