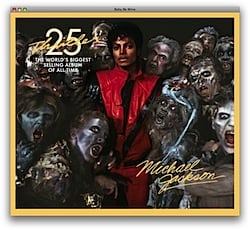 "Dangerous" was probably the album I listened to the most as a young, dumb boy. And I absolutely loved Michael's great music videos on Mtv, too! I guess I'm one of the hardcore fans from him. Anyway, his last two or three albums were really bad, so I had almost forgotten about him. Well, his music, in the news he appeared more than enough, didn't he?

I listen more to Blues, Hip-Hop and House nowadays anyway (weird combination, I know), so when I got the iTunes Newsletter today stating something about a new Michael Jackson album I was immediately interested. It got even more fascinating when I read the track list - many songs featuring artists like Kanye West and Fergie? Cool shit. After listening to it just now, I can only recommend you to buy it (or not). Beat It 2008 (25th Anniversary Remix) [feat. Fergie] for example is really old school, but at the same time a bit enhanced and just... fun. And Billie Jean (25th Anniversary Remix) [feat. Kanye West]? If you liked the Daft Punk mash-up with Kanye and are a MJ fan, you'll absolutely love it.

It's really fresh and also it's just good to have his best classics in your library, too.