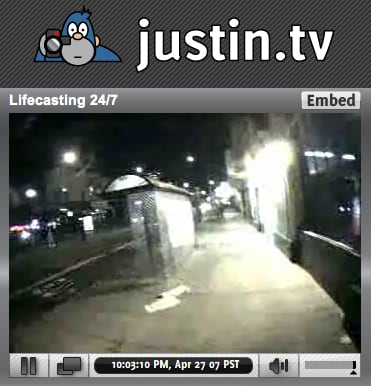 I wanted to write something about this guy Justin since weeks. So he lives in San Francisco and he has a mobile web-cam that he never turns off. He is live 24 hours a day. On the internet. Via live-stream. On the domain justin.tv. I guess he hooked up his web-cam to his notebook which is hooked up to the net via UMTS or something. It's insane, it's new, and it's more than fascinating. He's doing this since over a month now, in the beginning he became the target of pranks, some people send once the police and once reported an fire in his apartment. These days he hit the news on blogs once again, as he is getting evicted without any real reason. I guess his landlords don't like his tv-station and all the attention that he draws to his surroundings. Like we say in Germany: Maybe they have some bodies lying around in the basement, who knows. Anyway, if you didn't know him yet... Hope now you're interested. And good luck retrieving the live stream, it's often full and requires a lot of refreshes. Don't give up!