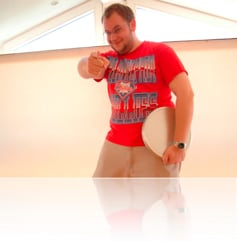 My passion for movies started back in the December of 1986. At the age of four, my dad took me to see Disney's The Great Mouse Detective in a cinema. Seeing an animated mouse on a big screen was more then fun, it was a groundbreaking experience for me. I became a flick addict that day.

When I was eight, my dad bought a mini-VHS Camcorder, which was the first camera that I ever held in my hands. From then on, I was responsible for making vacation videos...

By the age of eleven, I started making stop motion animations with Lego toys and one of the first DV-camcorder cameras (a JVC model) from my dad.

With 16, I won a ghetto blaster by submitting a short that I made to a contest from the biggest German movie magazine, called "cinema" (I cancelled my subscription later and started writing my own reviews, though). The short was a processing of my arachnophobia, so a big spider crawled through our house and killed my mom at the end. I used a 3D program called 3D studio Max to animate the spider and edited it in adobe premiere. So with 16, I had made my first compositing video!

With 18, on a student exchange with Kumamoto, Japan (that's the partner-town from Heidelberg, my current city), I got to see some Asian flicks and got a huge fan of Asian cinema. Kurosawa, Miyazaki, Miike, Kitano... there are so many interesting directors in Japan alone, it's unbelievable! And now even Korea is hitting in hard with movies like Old Boy or Memories Of Murder.

Anyway, with 20, after school and starting an apprenticeship in an advertising company in Frankfurt, I bought the best camera that I could afford, a Canon XL1S - and made some shorts for the apprenticeship school. My video teacher even met me outside the school time to talk about cameras and movies. He gave me an A.

Since 6 years now, I am writing movie and DVD reviews for my website. Since 1999, my DVD collection has grown to over 400 titles! First the reviews were on yakobusan.de, but now I founded a news portal with a friend, mysan.de. The average readings of my reviews are 5000 times, but sometimes reviews go even better, Matrix Reloaded, for example, was read over 25000 times. I do the reviewing since I want to share my point of view from movies with the rest of the world. I even covered three times the whole Fantasy Film fest here in Germany - that was three times one week with over 40 movies shown!

Thanks to the success from the site, and the visitors that came through it, I was able to get an accreditation for Cannes in 2005! Being there, seeing so many movies, directors, stars and... just movie people, my cinematic fire started erupting once more. I realized, I really need to learn making movies and do my own thing later on...

Right now I am having two video podcasts, one is called 'Jiajia and Jakob in Shanghai' - it stars my wife Jiajia and me, also I have a video review podcast called mysan.de moviecast. Both podcasts can be found here - or on You Tube, if you prefer that.