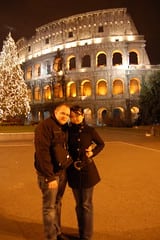 Being 25 years old, you usually don't get a kick out of christmas anymore. Sure, it's nice to have that one special day that you can spend with your family, but let's be honest, it was way more fun when we were children and got presents and stuff.

This year was completely different. My grandmother actually managed to bring together the whole family from one side (the italian side) and some more of the german family side. So we spend christmas with over 20 people - what a blast! I knew it was going to be fun, but I really didn't expect it to be that good. We had family members from three continents: Europe, America and Asia. Incredible.

We all met in a beautiful small town called 'Monte Pulciano' in italians most beautiful region, tuscany. If you have never been there, you sure should go there sometime. Tuscany has the most incredible colors in whole europe. Just take a look at the gorgeous pictures I shot. 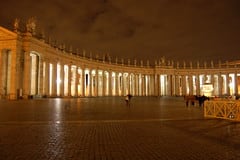 My wife and I arrived on December 23rd in Rome, where my aunt came to pick us up. My wife had only one time been out of China before this trip, we went to Germany in July, so being able to introduce Italy to her meant really much to me. After arriving at my aunt's home we relaxed and had lunch. In the night, my uncle took us for a trip around Rome - there I shot the picture of the Colosseum that you can see at the beginning. 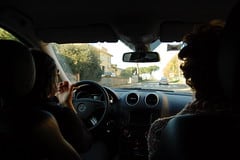 The next day we left Rome for Monte Pulciano, which was a two hour trip by car away. Driving through the region around Rome was incredible, after spending a year in China I didn't even remember how beautiful it is in Italy anymore! We were the second last ones to arrive on that day, so most family members had already arrived and moved into their rooms in the agriculture where we were going to stay for three days. 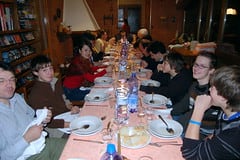 We had beautiful room with fantastic decoration, italian people truly know how to decorate and how to make things look harmonic. Christmas eve dinner was delicious, but the 'real' christmas dinner was on December 25th, where we ate for almost three hours non-stop. That was good, but my chinese-food-trained stomach was a little bit angry about the heavy, oiled food. No reason to stop eating, though... 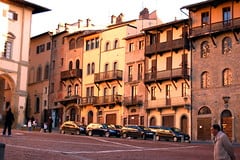 During our stay in Monte Pulciano we visited the town Aruzzo, where we saw some beautiful fresco paintings inside a church - sorry, taking pictures was forbidden. We ate and talked and had fun for four days. It was the best christmas ever, and I am not saying that exaggerating. It really was, because it was a perfect time to introduce my wife to everyone in the family, to see all the family again and to eat italian food, of course.

Later we drove with my grandparents to the Lake of Como, where we went shopping one day and visited Milan the other day. See the pictures here.

Having just one week of vacation we had to cut things short, so when we went to Paris for our last day and our flight was delayed by two hours due to fog, we had to explore Paris at night. We got up at 5 in the morning and took the first available train to the city. Our first stop was the Notre Dame (which totally doesn't stand a chance against the Duomo di Milano!), then we took a subway to the Eiffel Tower, walked from there to the Champs de Elysees and had a french breakfast on the way. What a hurry, we need to go to Paris sometime again and take a whole week for it.

Anyway, all in all, we had a crazy but fun vacation this christmas. We managed to see three important cities of Europe and saw the whole family by the way. Not to mention the great food all the time, and the beautiful tuscan colors. That would've been worth the trip alone already.

Let's see all the family again in may for our wedding party!