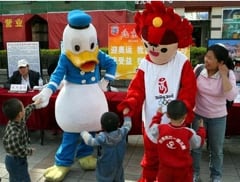 Just in via /. and Japan Probe:

"Apparently Japanese TV and bloggers have just discovered Disney's theme park in China, where young children can be part of the Magic Kingdom and interact with their favorite characters (like Mickey Mouse, Donald Duck, and the Seven Dwarfs). The park's slogan is 'Because Disneyland is Too Far,' and there's even an Epcot-like dome. The only problem? Disney didn't build it, and they didn't authorize it. What's more? It's state-owned!"

My opinion on this? I gotta check that out when I am there with my small brother and sister in June! Seriously, state-owned? That's more than hilarious. And typical. This is China!

Select which cookies to opt-in to via the checkboxes below; our website uses cookies to examine site traffic and user activity while on our site, for marketing, and to provide social media functionality. More details...