Is this not the most insane building in the world?

You can buy a print of this image at imagekind.

About the building:
The project was started in september 2004 following a review of the design by a panel of Chinese experts. The construction is scheduled to be completed in time to broadcast the Beijing Olympics in 2008. The development is being undertaken by the Chinese Government as part of a plan to redevelop central Beijing with innovative and functional architecture, while preserving historic buildings at the same time. The new building will involve two 'L' shaped high-rise towers linked at the top and the bottom at an angle to form a loop, which has been described as a 'Z' criss-cross. The total construction cost is estimated at €600 million ($750 million). The CCTV tower will employ 10,000 people following completion in 2008. But the construction was daleyted because of the opposition against this buildings cost, so the developers say the building will probably not be completed before 2009. (Source: SkyscraperCity)

About the image:
This high definition range image was created with three RAW files. I've created four different HDR versions and edited the best out of each version on top of the other. Took me over two hours to finish this beast in Photoshop. 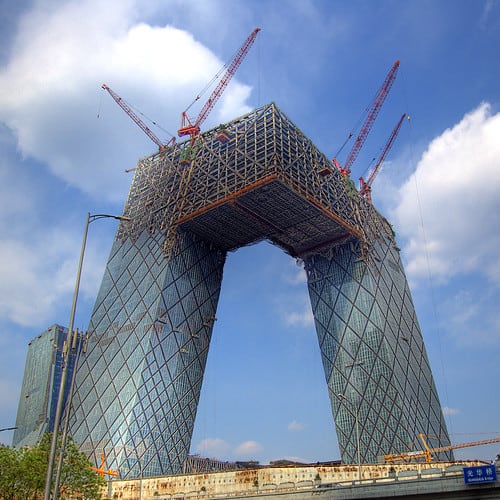 Cranes In The Sky., originally uploaded by Montrasio International.