I don't remember the exact year, but it must have been at least four or five years ago. Billy Crystal was the host of the academy awards that year and a hilarious clip was shown before the show or as advertisement: Billy Crystal goes to the cinema, buys a popcorn, goes to his theatre, sits down, watches the commercials and as soon as the movie begins, he pulls up a tripod with a camcorder attached to capture the movie. That was a brilliant joke, back then this crazy sport was just getting famous. What the hell has this to do with Eric Clapton, you ask?

Well, yesterday I laughed as hard as back then. I went to the Eric Clapton concert in Shanghai's 'East Asia Sports & Recreation Center', or short: Shanghai Stadium. When I got the tickets for the concert I was already amused, as it said on the back 'Taking pictures and filming is not allowed', followed by 'Absolutely flash is not allowed' or something like that. Paradoxical. Crazy. 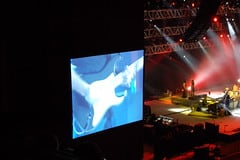 As soon as we entered the stadium, found our places and sat down, I started checking the area, as I have never been there before. To the left and right of the stage were two huge screens with projected videos or images, and before the show they both said in big letters: 'TAKING PICTURES AND FILMING IS NOT ALLOWED'. I was really nervous at the entrance, as I managed to smuggle my Nikon D50 in my wife's handbag into the stadium. But once I looked closely at the other guests entering, I calmed down. At least 10 chinese people entered at our gate - one of over 20 gates that is - with a big camera in their hand. I am not talking about camcorders here, I am talking about professional cameras like the Canon XL1s. I even saw one guy with that new Sony HDV camera. As that is not enough, there were even three guys bringing their tripods! Are you kidding me?! A pack of cigarettes or some 50 Renminbi must've been enough to pass the guards with that equipment... Crazy. 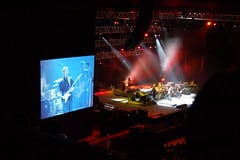 But enough of the security in chinese concerts now. Let's go over to Eric. To Mr. Slow-hand. To god.

Just 10 minutes late the concert started at 7:40 p.m., Eric came straight on the stage with his band, no pre-band or something, and started playing right away a mix of three songs, including the beautiful 'Why does love got to hurt so bad'. After this more then 15-minute long jam he finally greeted the audience and started to introduce the band members within the next songs, giving them also solos to show off their skills.

He played some songs from his new album with J.J. Cale as well as older ones. Hits like 'Wonderful tonight', and he even played one song acoustic, just Eric and a non-electric guitar. Beautiful. Finally he brought the crowd from their seats playing the never boring 'Layla', people started to dance, walked in front of the stage, the highlight of the show. They played one song extra after leaving the stage the first time, then, after about one hour and fifty minutes, the concert was over. 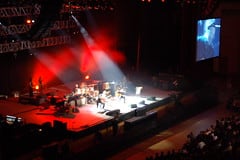 Call me spoiled, go ahead, but I've seen two much better concerts from him in Frankfurt, Germany. The last time I saw him he had Robert Randolph as his pre-band and damn it, that was the best concert ever. First Randolph played for about an hour, then he played with Clapton together again, the concert was almost three hours long and the crowd went nuts, really.

Then again, Clapton is not getting any younger, and he just arrived from Korea and Japan, where he played an almost insane amount of concerts. The purpose in the first place was to introduce my wife to the 'live' Eric anyway, and that mission succeeded.

See the 'Eric Clapton live in Shanghai' flickr set from me here.