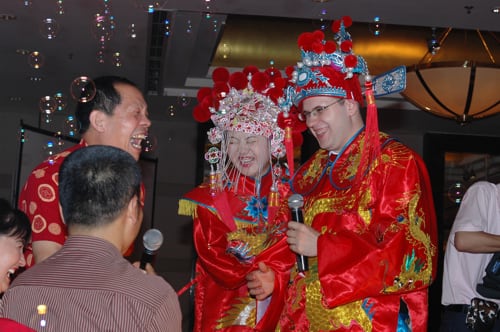 That have been two damn long weeks since my last post. In the meantime I married (well, officially, with a party and stuff), traveled with 20 friends and family members to Xi'An to celebrate my wedding, after we had spend some days in Shanghai that is, then we flew from Xi'An to Beijing for some more sightseeing and partying. Sounds like fun? No, sir, sounds like stress. I'll never ever play the tour guide again. Especially in Beijing, where the taxi drivers might very well drop you off at the same place, but within a mile of everyone else. It's really no fun to take 5 taxi to the same place. Also, while Shanghainese taxi drivers make it very clear where to take you, Beijingnese drivers tend to say 'sure' but don't really know where they have to go. Nightmare! Now I'm back at work, and after reading about 250 emails of which 200 were spam, about 1000 feed entries and three coffees I finally have a free minute to tell everyone that I am still alive. Since next week I am busy with the Shanghai International Film Festival, I won't even start now to deal with the marriage pictures and video... Please, give me some time, people! It's also good to be back in Shanghai because it's like 300 degrees less warm here. Beijing is like a hotpot for people! Gotta run to dinner now, then to a business meeting, and tomorrow I gotta visit a exhibition. I need a vacation, damn it!