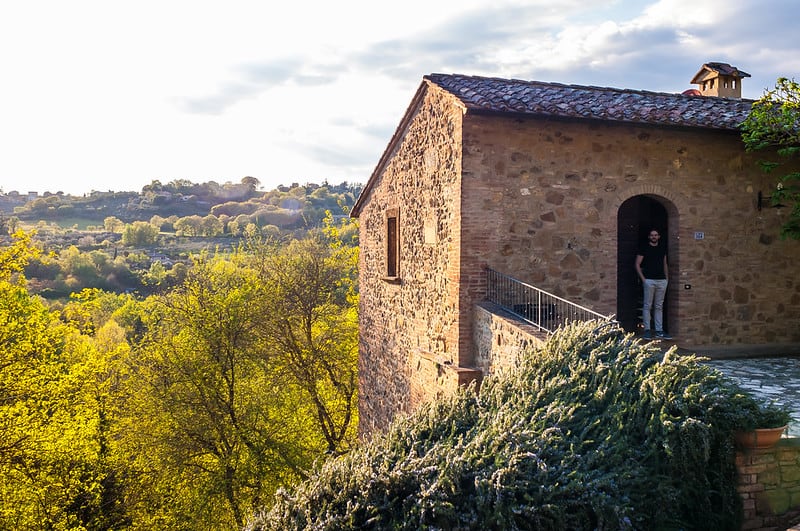 Not a single day of rain during our easter-trip to Montepulciano. How lucky. Each day better weather, better food and even better sceneries. Squeezed into a tiny BMW 116i with a little Thule box on the roof, my brothers from Berlin as well as my daughter started the trip from Germany. We drove through France and Switzerland and made our first stop at the lake of Como. Thanks to the beats of Coldplay, Jamiroquai and soft West- and Eastcoast beats, it was a fun ride all the time. A stupid traffic jam at the Gotthard tunnel stole us over two hours, but my grandmother made such an delicious dish with eggplant and melted cheese that we quickly forgot about it. Even Emily enjoyed the veggies, which are usually disgusting to her.

Emily & NonnoAfter enjoying the epic view oft he Como lake during sun rise the next day, we hit the road again, driving south, to meet up with our sister in Parma, for lunch. Here we were also joined by Rudi and his family, they came along fort he rest of the trip. Parma was incerdibly warm, the sun bruning down, surreal, considering we were in freezing Germany just a day before. After shoving down an delicious pizza, we hit the road once again, with our real destionation: Agriturismo Bossona da Maria Elena in the city of Montepulciano. The aggritourism is, as the name promises, surrounded by olive trees and winefields. Dreamy scenery!

Italian highways may be many things, but one thing they are not: Entertaining. Endless long straight roads with very few curves – you tend to get very tired after a while. But once we reached Tuscany, the highway finally got more exciting and more curvy, more fun to drive. German precision did let us down once we reached Montepulciano, as the navigation system steered us into the middle of nowhere – a winefield behind us, a company building in front of us. We turned roaming on and thanks to Google Maps, we eventually found the right road, just before sunset.

It was great to see Maria Elena again – the last time I saw her was about ten years ago, either at my wedding reception or at a family gathering, I’m not sure anymore. We chatted a bit before she showed us to our apartments. What a palace we got! It’s really something special to live and sleep in a house that was build around the year 1200. She recommended a restaurant for the night, and we happily followed her suggestion. Since cars are not allowed in montepulciano – except fort he residents, of course – we had to park near the city wall and climb those stairs up to the city, a slight nuisance with three kids. But then again: the fantastic food made up for all the annoiances oft he day. It was so damn good.

We wanted to start slow, so we didn’t plan any huge trips fort he first day. To have breakfast for the following days, we first shopped at a local supermarket and stocked up on cereal, milk and so on. Pretty crazy how expensive Italian supermarkets are considering how low the income is. We live in the land of cockaigne in Germany with all those cheap Aldis! After a small lunch we walked back to Montepulciano for sightseeing, this time in daytime, and for some sweet Italian gelato. It’s not considered to be the best ice cream in the world for no reason… La dolce vita!

Our first real daytrip led us to the city of Pienza, recommended by my dad, a city which is in its whole a UNESCO world heritage site. Other then Venice for example Pienza didn’t feel overrun at all, we were actually surprised by how few people seemed to live and to be in the city! A true hidden gem, worth the trip just by visiting the Piazza Pio II square alone. Not afraid of heights? Climb the Palazzo Comunale for some seriously stunning scenery. Though once we looked at the menus of restaurants we were reminded, by the prices, that we were in a touristic town indeed. So we skipped a big lunch and went for some Paninis instead, just enough to keep us alive until dinner.

And what a dinner we got! Spontaniously we invited Maria Elena to join us at the second best restaurant oft he region, according to Tripadvisor. It had a few hundred votes, so I trusted the rating, and luckily I did! The place was called La Bottega Matta and while it didn’t look so great from the outisde, it was great on the inside. Don‘t judge a book by its cover. We were greeted by the friendly owners and they suggested a fantastic combination for the evening: craft beers, salumi and Pici, an Tuscan noodle specialty. With prices so low that we were really wondering how they can be so little. It was a highlight and truly delicious. In fact, it was so good that we came back a few days later just to buy some more of their salami, ham and cheese as take-away. Yummy and highly recommended restaurant! 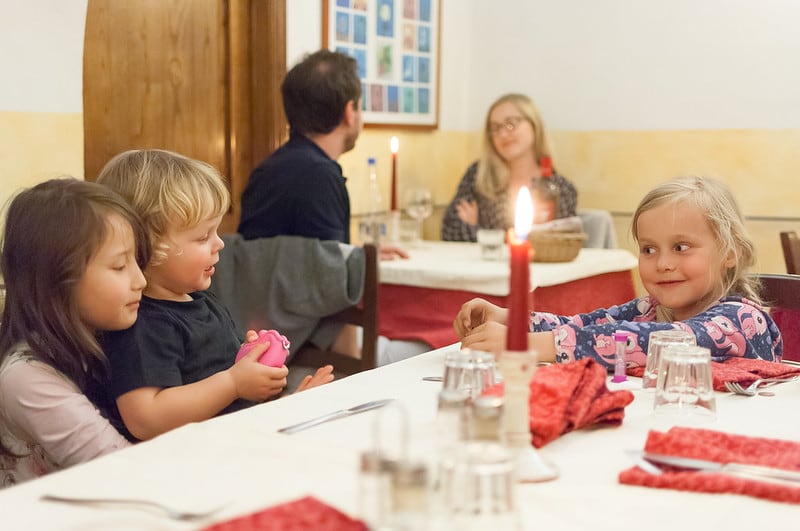 Bursting with energy and round bellies we drove to Siena the next day. Even though easter hadn’t really started yet, and on a Monday, the city was already bursting with visitors. I don’t want to know how full it is during high season, really. It’s the Venice of Tuscany, one could say. Besides the masses of people there were also quite a lot of busses and taxis driving through the city, which hurts the image by quite a lot, in my humble opinion. It was not pleasant to jump to the side all the time and to scream at the kids every 30 seconds to watch out for cars – in a walking zone. But again, once we reached the city center – all forgotten. An epic, majestic view awaited us. We gave up on finding an affordable restaurant and went straight for a pizza at the Piazza del Campo instead, breathing in the fantistic view with each bite on the once again perfectly made pizza. The view of the square in Siena truly was another highlight. The way back turned into a disaster though, and a wrong parking spot and some good old ignorance forced us to search for the car for about two hours. But before that long walk we went to the Fortezza Medicea to finish the city tour with a beautiful vista of the city.

The trip to Siena was quite exhausting, so we visited something much smaller the next day: Bagno Vignoni. It’s a cute little place with thermal baths and a handful of nice pizzerias. After enjoying a pizza once again – and each pizza we had in Italy was simply stunning! – we went for a child-friendly walk nearby into nature. We simply couldn’t get enough of the Tuscan landscape and took pictures like we were on visual steroids. 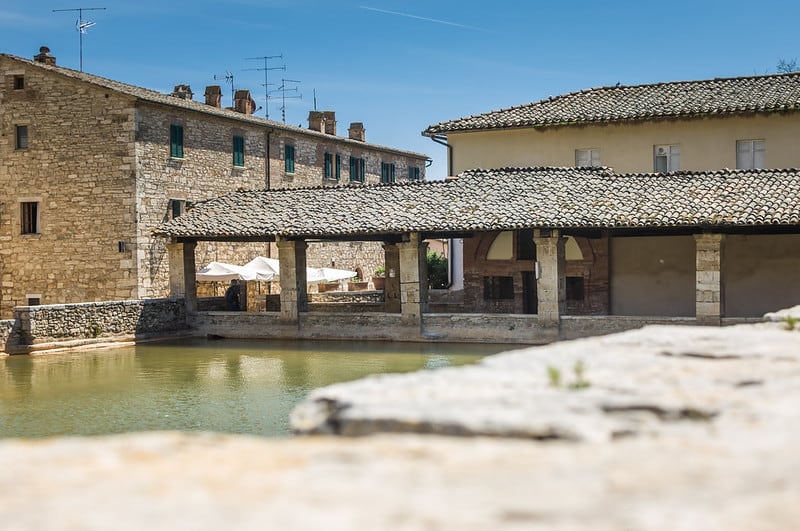 Since we didn’t find any public thermal baths in Bagno Vignoni, we went to the biggest and most badass thermal bath place nearby, it’s called Terme Antica Querciolaia. For about 10 bucks per head you get quite a few different thermal baths – we counted at least eight – with different temperatures and both on the inside and outside, for as long as you want to stay. In Germany you pay about 25 bucks for only 4 hours, this really seemed like a super fair price to me. We had the most fun at a little round water-path, where each half is seperated from the other one. One half has really, really hot water, while the other one is extremly cold. As you walk round for round through the ring, you first get a burning sensation in your legs, which then turns into an extreme refrehsment for the whole body. So much fun!

In the afternoon Maria Elena took us to a winery called Tenuta Valdipiatta, so that we could buy some wine to bring back home. The owner of the winery did let us try the different qualities and explained us that he still uses exclusively the Tuscan grapes, while other wineries are mixing in grapes from other regions. All of his wines tasted great and we bought a bunch of boxes. Fun fact: the winery we were now in was the building that the navigation system led us wrongly to upon our arrival!

Then, finally, on the last night in Tuscany, we had the food highlight which I teased in the title already: Bistecca alla fiorentina. Now, I’m no food reviewer. I don’t know how to put the quality of this meat in words. It’s grilled on the outside, but almost raw on the inside. The only seasoning is salt, that’s it. It’s a cliché to say „that was the best meat ever!“, but in this rare case, it would do the taste actually justice. Like you can see on the photo, we shared two and a half kilos of meat by four people. The name of the restaurant was Osteria Acquacheta in downtown Montepulciano.

Let me review the quality like this: Just to eat this once more, I will travel to Tuscany soon again!